The Bog Baby is a truly magical story by Jeanne Willis and Gwen Millward.

But the Bog Baby is a wild thing, and when he becomes poorly the girls decide they must tell their mum. She tells them the greatest lesson: if you really love something, you have to let it go.

Today we went on a Bog Baby hunt to Bluebell woods. We used our senses...

What could you hear?

What could you see?

What could you smell?

We arrived at Bluebell Woods.
We found lots of clues to prove there were Bog Babies about...
We found...
Have you caught anything?
Fishing for Bog Babies in the pond.
Are they in the bush?
Have you looked in the willow tunnel?
Look, they've hatched!
It's a Bog Baby!

The teachers acted out the story!

Then it was our turn

We have been working hard in continuous provision.

What have you built?

How long is your model?

Does the Bog Baby fit in it?

Labelling body parts
Speaking to Bog Baby on the phone
Counting in 5's independently
A Bog Baby!
Our scarecrows..!!
We have been labelling different body parts.
Once a crow nearly ate him, but we scared it off just in time...


On a warm afternoon Chrissy and Annie decided to take Bog Baby for a walk. They made him a collar and a lead and off they went to the park. They were having a lovely time until a crow swooped down to catch Bog Baby! Luckily enough the girls scared the crow off, just in time!

To make sure our class Bog Babies stay safe from the pesky crows we discussed what we could make to scare off any unwanted guests. We decided on scarecrows! We designed our own scarecrow, made them in continuous provision and even made a life size scarecrow for each class. Surely a huge Bog Baby would scare away a crow?

We filled in the Dr's health record.
Our Class Scarecrows.
Our Scarecrow Assembly - Harvest.
A big, red combine harvester!
A visit from the health visitors.

The Health Visitors have said that 1EB's Bog Baby is fit and healthy.

He is 20 centimetres tall and he weighs 20 grams. We told the health visitors how we care for our Bog Baby and they said what a good job we are doing!

We have been around school to stick missing posters up in the hope that somebody finds him. Fingers crossed!
First we stuck a poster on the door where the parents collect us. Then we asked Mrs Dowie in the office if we could stick a poster on her window. Finally we asked Miss Bethel from year two if she had seen our Bog Baby! She looked worried too. She said we could stick our poster in Year 2.

We have received postcards from the different countries that the Bog Baby had visited. They were England (London), Northern Ireland, Scotland and Wales. We stuck these postcards on to the map of the UK and had a chat about which country he visited first.

Ollie said "I think he went to Wales first because that's the closest to Southport!"

The next day we received an email from Barnaby Bear. It said...

My name is Barnaby Bear.

I’m friends with the Bog Babies and arranged to meet them last Monday at my house in Manchester. I thought I better email you and let you know that they are safe and sound. I have talked to them about the importance of always telling a grown up where we are going before going anywhere. I thought I would let you know what they have been up to while we have been travelling around the United Kingdom. They will be coming back to Southport soon. I have never visited Southport before so maybe I could come and visit you soon. Enjoy looking at the photographs. Take care.

We spoke about always telling a grown up where we are going and the different ways of communicating. We came up with:

Have a look at the holiday pictures below.

We have been learning about the different countries in the United Kingdom and some of the major cities. We talked about the map and where we might have seen one.

Liam said "I saw it on the tele when the weather was on."

We decided to make our own weather reports. Take a look at a couple below. 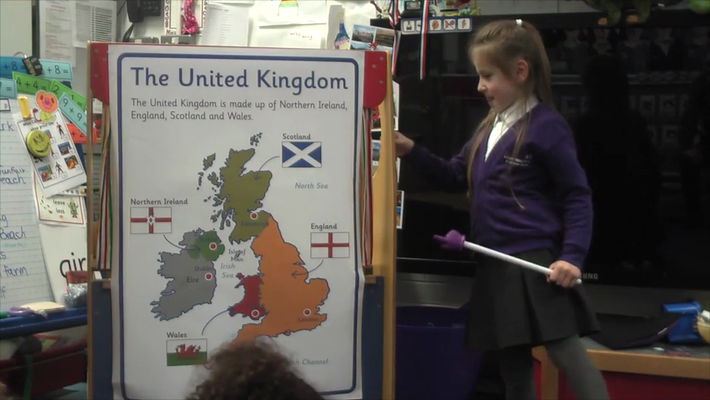 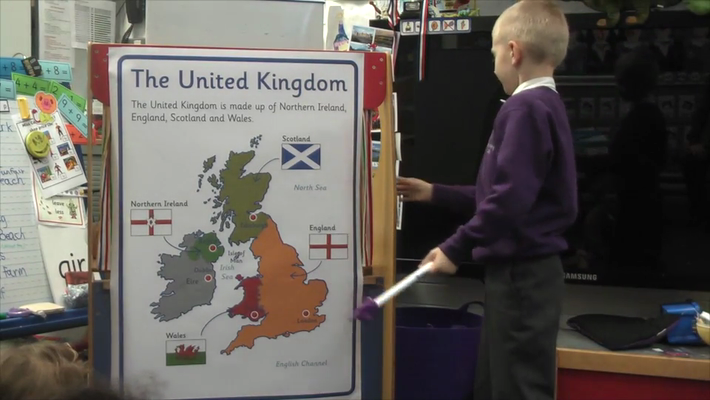 At the end of the lesson we received another email; this time from Mr Povey! He had spotted the Bog Babies on the school's special CCTV cameras. Have a look at the camera footage below. 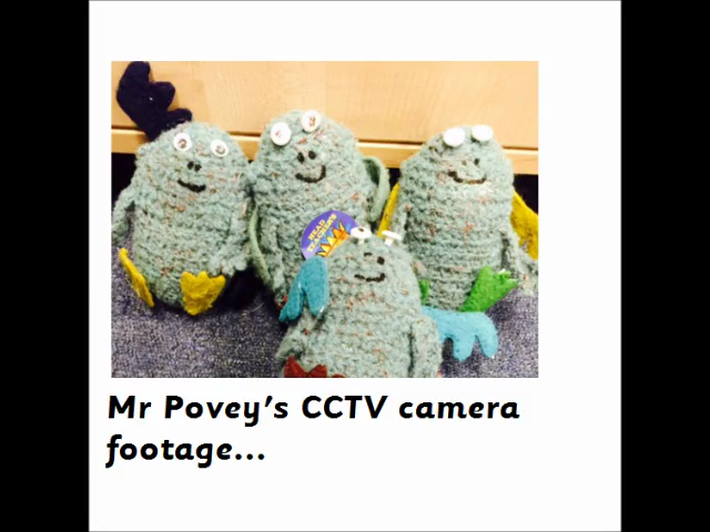 When the Bog Babies finally got back to our classes we realised that they had got sick; we had to send him home to his pond. In preparation for this the children wrote party invitations, wrote me a very long shopping list and wrote and decorated a card to say goodbye to the Bog Baby. Then we threw a party for the Bog Baby, we played party games, had party food, sang our Bog Baby songs and he even left us a present to say thank you - a small, chocolate snowman!

As well as the three Bog Babies we found in the Willow garden, there were also three that went home with the children. The teachers in Year 1 would like to say a big thank you for welcoming the Bog Baby into your home and supporting your child when writing in his diary.