The Duckbill Dinosaurs Vs. The Ts

Everyone knows that tyrannosauruses are big and scary, so when a placid duckbill dinosaur's egg ends up in the wrong nest confusion is sure to ensue! When the baby dinosaur hatches out, he's so out of place that his grisly big sisters call him Tyrannosaurus Drip. Poor little Drip: all he wants is a quiet life munching on water weed...

This week, the teachers introduced us to a new story called Tyrannosaurus Drip. The book is about two different groups of dinosaurs and the main character is poor Tyrannosaurus Drip. We have all enjoyed listening to this story and getting to know the different characters, good and bad! We practised our story mapping and have retold the story.

Today, we recapped what we had learnt about continents and oceans from year 1. We sang songs to help us and learnt some interesting facts. Then we had to arrange the continents into the correct places. Once we had done this, we found notes from dinosaurs telling us where they had lived or where their fossils were found. Our job was to add them to a blank world map. 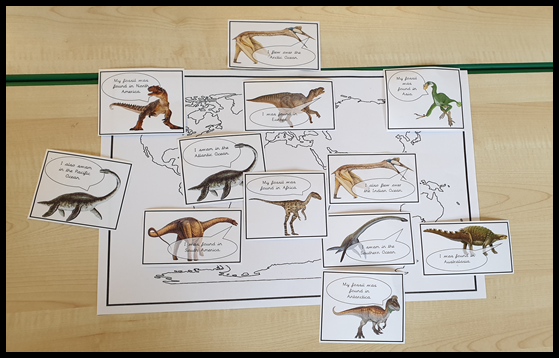 This week, we have been writing dinosaur poems. We learnt about onomatopoeia, alliteration and rhyme by playing different games. Then, we came up with lots of ideas of the sounds you would hear in a dino's habitat. The challenge was to write a poem using these onomatopoeia but to also use alliteration!! We think we have it sussed!

This week, we have been using what we learnt about prepositions, adjectives and our senses to describe a setting from our new class text, another from Julia Donaldson; The Dinosaur's Diary.

As poor H (Hypsolophodon) is running away from Meg (Megolosaurus), she runs through what she thinks is a puddle, only to find herself being sucked down and then popping out millenia later in of all unlikely places, a farm! Not knowing where she is, she sets off to explore.

Pretending to be H, we wrote a description of what her new home was like. Take a look at some of our great ideas below. 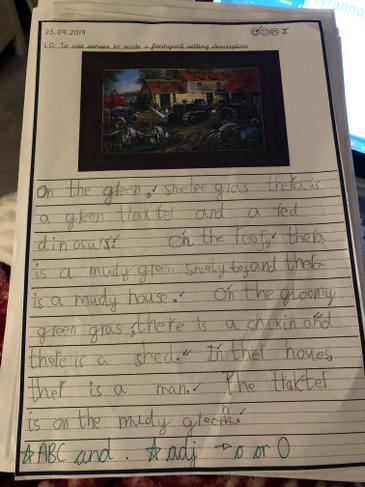 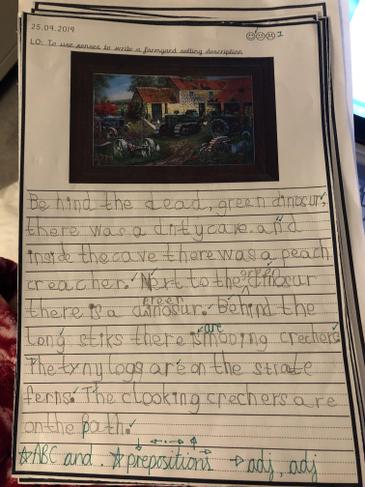 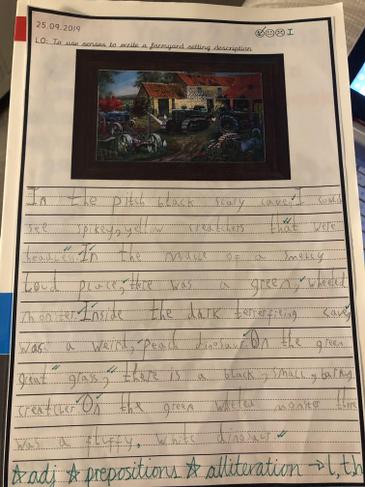 On the 17th October, Year 2 visited the world museum in Liverpool. We explored the whole museum and found out lots of interesting facts. When we got back to school, we planned and wrote a recount of our day. Take a look at the photographs below.

A big thank you to all of the parents for their kind contributions, allowing the trip to take place.

In Autumn 2, our learning in Topic will have more of a history focus. In English, we are writing a report about the life and work of Mary Anning and have been using our computing lessons to research her using the internet. We answered lots of questions about her and also found out loads of interesting facts! We're going to use them in the 'Did you know...' boxes of our report. 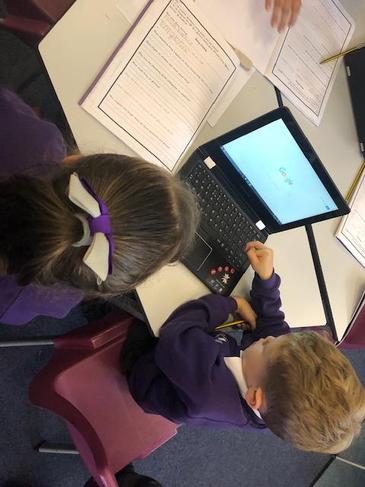 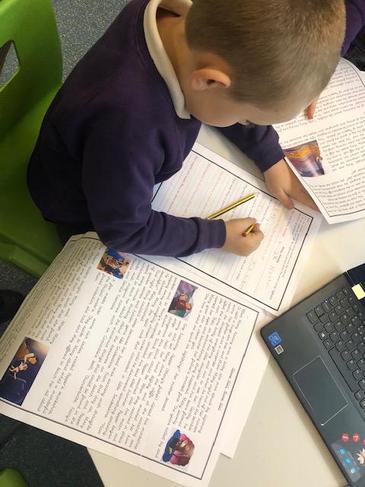 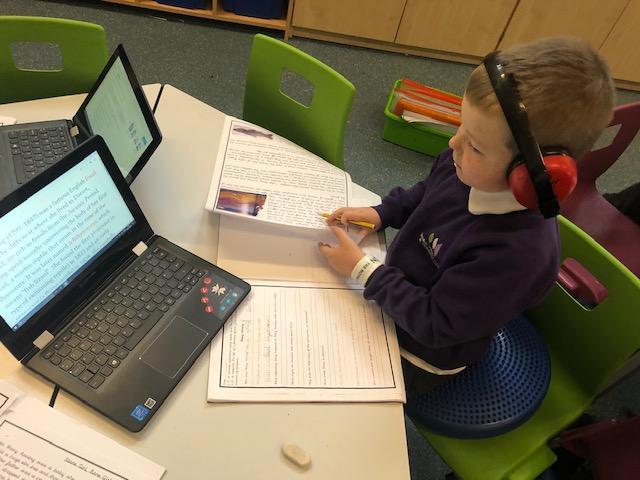 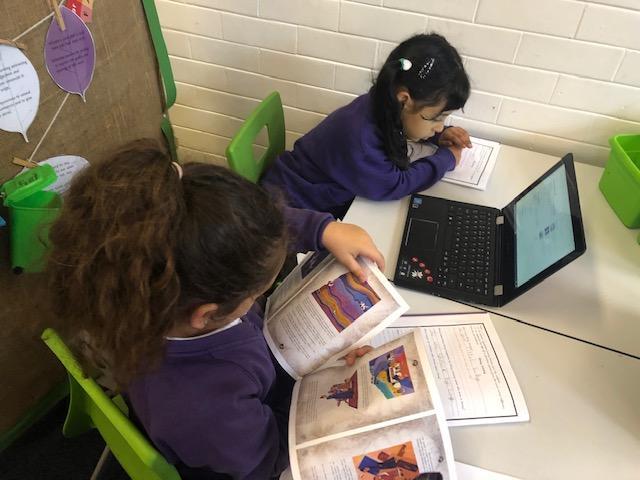 In our history lesson, we created a human timeline, using a child to represent 100 years. This was to show the time from year 40CE (Roman era) to present day. We found out when Mary Anning was alive in relation to other historical events (including us being born). Six children had the event/era cards from the timebox that we found. By counting along the human timeline, they had to see where they belonged. From this timeline we could see how close together or far apart the events took place. Have a look at our human timeline below.

On Monday 11th November, Mrs Lavelle received a strange email containing a video clip from the school's security cameras. Mrs Cain also received an email. Hers was a set of clues about some eggs. After watching the video (and seeing a triceratops run past the school), we knew the clues must have been about dinosaur eggs! The clues were telling us to look near wooden physical features, near large transparent materials, etc. How does this dinosaur know what we've been learning about?! As we left the classroom, we heard the sound of a hungry dinosaur so we went to help with the eggs. Thank goodness a triceratops is a herbivore! 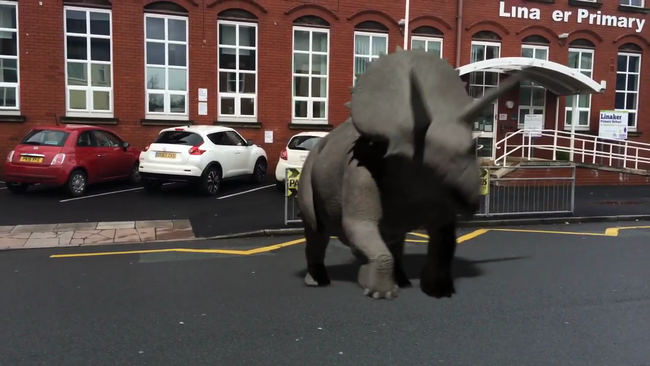 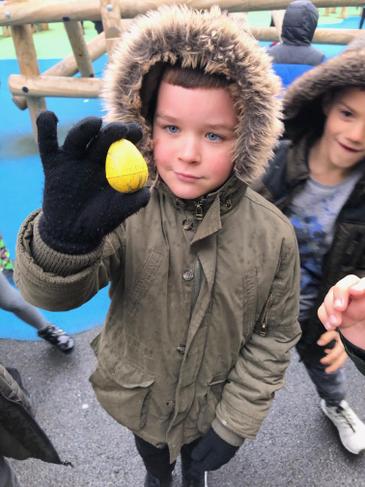 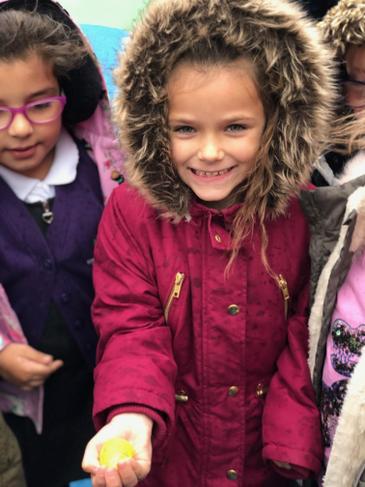 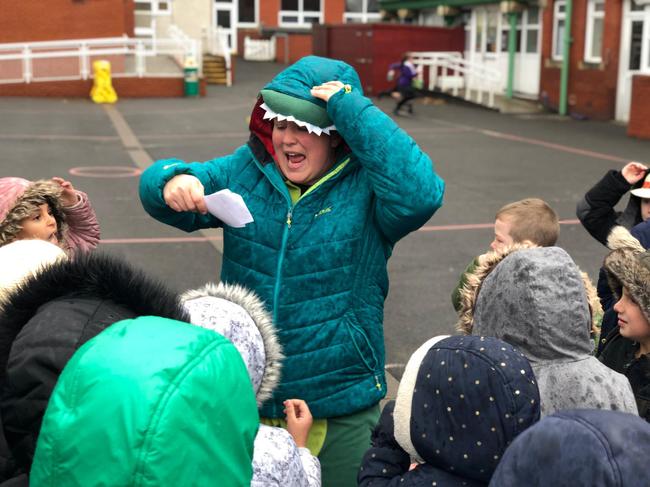 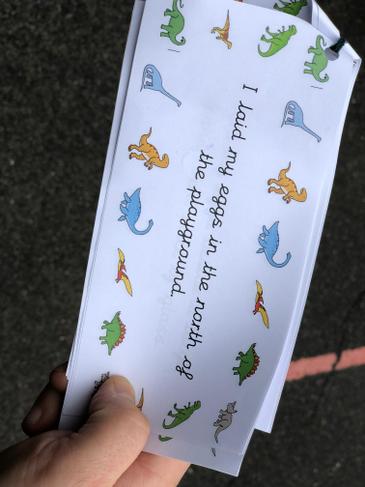 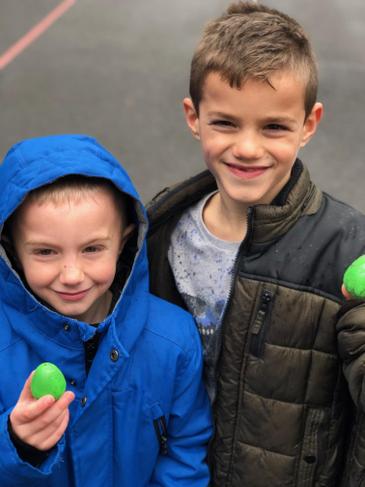 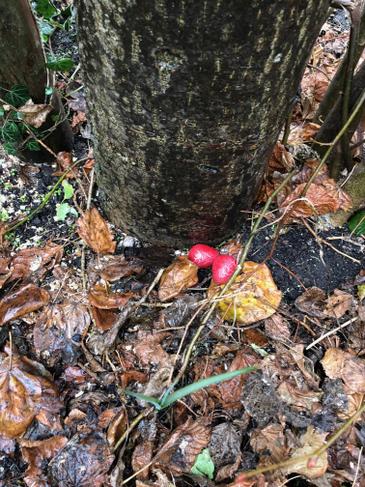 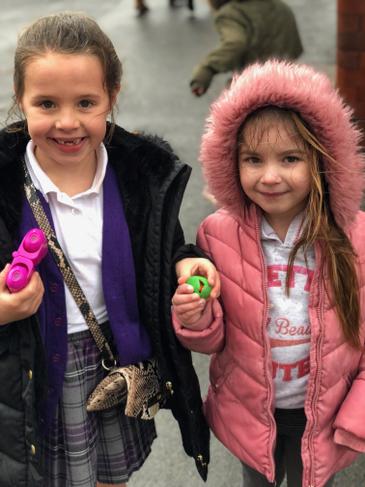 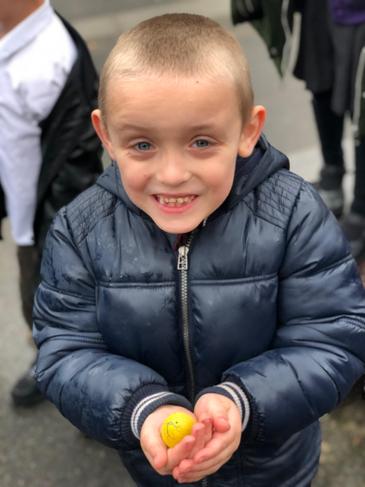 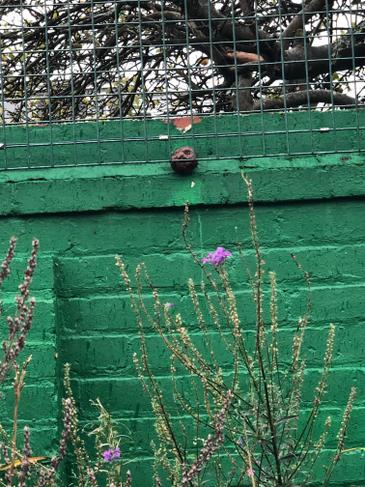 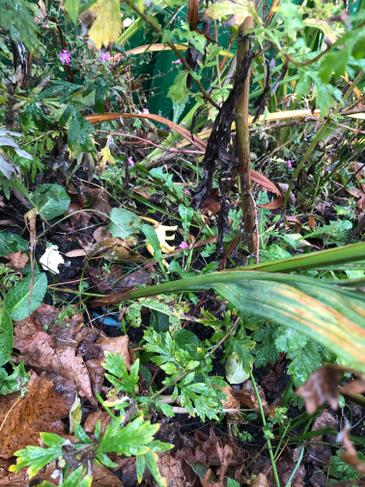 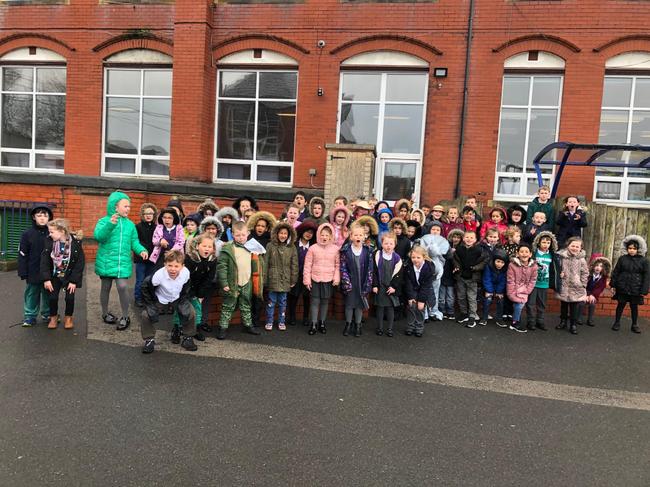 When we arrived safely back in the classroom, we discussed what we could do to keep the eggs safe. We had lots of ideas as to how we could help them; some people said to make them a nest and others said to put them in water. We decided that we would put the eggs in water but someone mentioned that fizzy water could be better. We decided to experiment and used Discover Dog to help us plan it. Have a look at what we're going to do below.

To record what we had observed, we completed an egg diary. Using our knowledge of days of the week and telling the time, we could record the changes over time. We drew and labelled the three bowls (including liquids and eggs) over a few days. 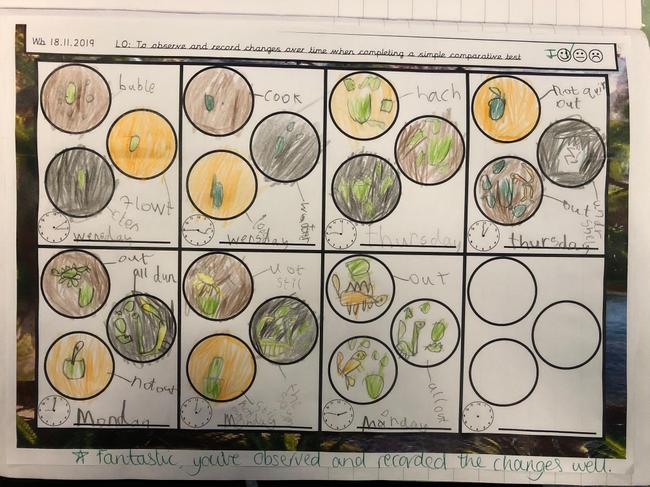 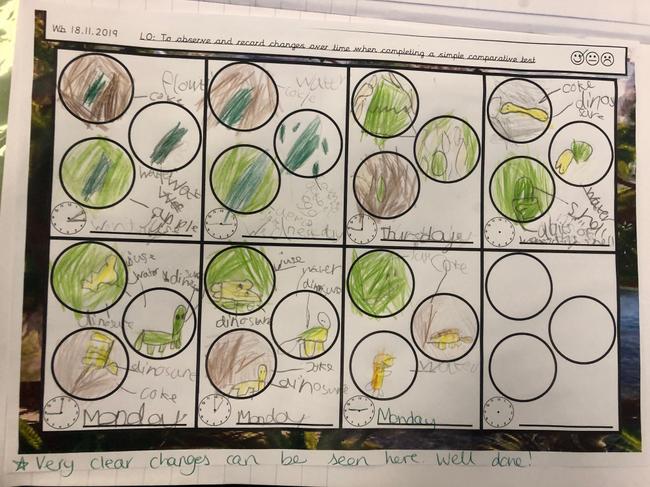 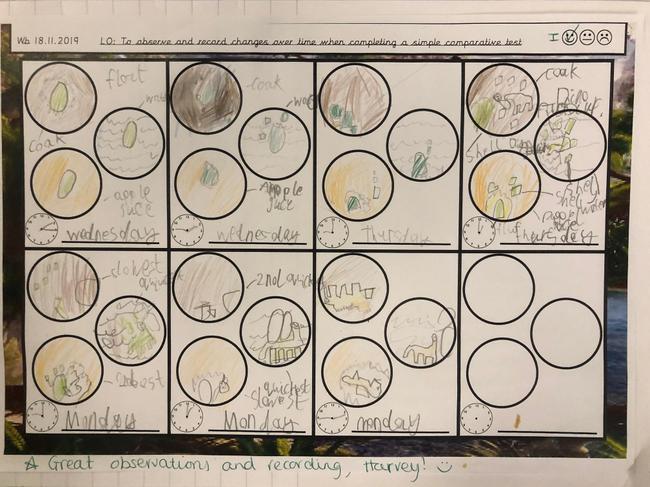