Laszlo is afraid of The Dark. The Dark lives in the same house as Laszlo but mostly spends most of its time in the basement. Laszlo hoped that The Dark wouldn't visit him in his bedroom. But one night... it did!

At one point in the story The Dark begins to talk to Laszlo. The Dark tries to convince Laszlo to go down to the basement. Miss Boyle read the book and stopped at this part. She didn't let us know what Laszlo did next. As a class we had a debate as to whether he should TURN BACK or FACE HIS FEAR. Some of the children had such good arguments that they persuaded their partners to change their minds.

Have a look at some of our advice. 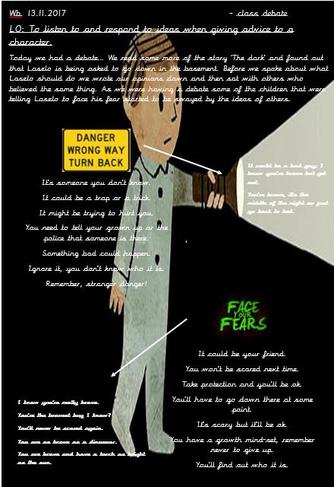 We decided to write a letter to Laszlo to give him our advice. First we had a look at other letters to look at their key features. Can you remember any?

Then we spoke about the persuasive words that we might want to include in our letters and began to plan them.

The Great Fire of London

When we came in from lunch we were shocked to find a basket of bread in the middle of the carpet, alongside a huge envelope addressed to 2EB. We were even more shocked that inside the envelope were seven more envelopes, numbered with the word 'clue' written on the front. We opened the envelopes one at a time to try and work out what had happened and why.

Have a look at some of our ideas below. 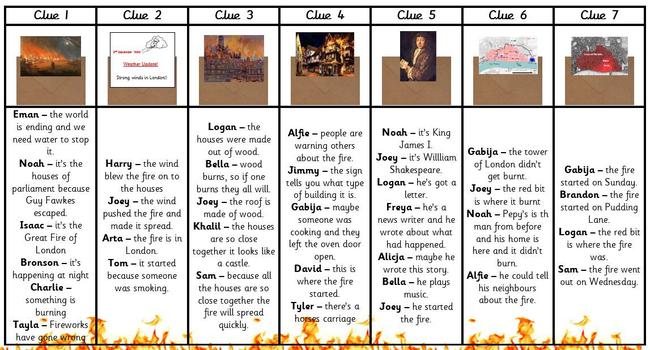 As we got to clue 6 and 7 everything started to piece together. On the map we noticed that there was a mark saying Pepy's home, then we noticed that's the man in clue 5. On clue 7 there was a yellow mark showing where the fire had started. Some children were able to compare this with clue 6 and found out the fire started on Pudding Lane. We found out the fire spread so much by looking at clues 2 and 3. The houses were close together and made from wood. We also found out  that it had been very dry in London but it was very windy causing the fire to spread.

Homework to make a model house

Today we created a human timeline, using a child per 100 years to show the time from Year 40CE (Roman era) to present day. Six children held the event/era cards from the time box that we had found. By counting along the human timeline they had to see where they belonged.

From our human timeline we could see that some events seemed very close together, although they were 400 years apart!! The timeline also showed how far away some events were (like dinosaurs living on Earth).